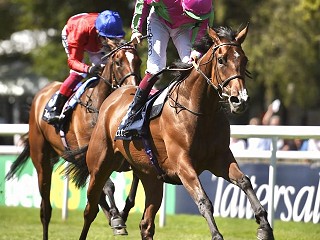 We had a terrific Newmarket July meeting with 3 winners and the same number of seconds.

Funny Story was impressive in the 6f 2yo fillies maiden, winning cosily after running green under a sympathetic Hector Crouch. She could step up in grade straight away, and it was a delight to train one again for Whitsbury Manor Stud, our former landlords.

Prosperous Voyage won the Group 1 Falmouth the following day, making all under a fine Rob Hornby ride. She was headed just over a furlong out, but stayed on well to upset 1-7 shot Inspiral, her former conqueror in the May Hill, Fillies Mile and Coronation Stakes. It was a fantastic day for all concerned and could have been even better if Lezoo hadn’t been hampered in the Group 2 Duchess of Cambridge, going down by only half a length.

Jimi Hendrix got up in the dying strides to win 24 hours later, to give his owners Chelsea Thoroughbreds another notable handicap win, after his gutsy effort when 3rd in the Britannia.

We are heading towards a decision over Westover’s participation in the King George next Saturday. He will work on Monday morning and a discussion will be had afterwards. He remains in good form.