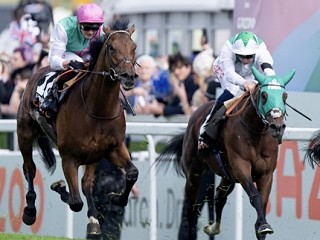 Westover ran above market expectation on Saturday to finish third. I was delighted with his effort, as we all were, although he was unfortunate not to have finished second having run into traffic two furlongs out. Desert Crown was impressive; Richard Kingscote was easing down some way before the line, but I was disappointed that Westover did not get the opportunity to bustle the winner up. Rob Hornby gave the horse a terrific ride from the coffin draw of box two, and he can be justifiably proud of getting him so close. As far as future plans are concerned, it looks like he will head to the Curragh for the Irish Derby in two and a half weeks' time, and if all goes to plan, the King George VI and Queen Elizabeth Stakes at the end of July.

The horses have largely been running well, but we’ve been hitting the woodwork with frustrating regularity in the past week. We’ve also had several horses run well and show promise for the future.

Delorean was much too keen last night at Chelmsford, but still finished well in third place. Both Star Fortress and Boom Boom Pow ran fine races to both finish second on debut at Windsor on Monday night. I was delighted to get Echo Chamber off the mark last week at Leicester, and Palm Lily made an impressive winning debut at Kempton the following day. Likewise, River of stars ran a fine race to finish second on her seasonal debut at Newbury. Lucander, after a two year hiatus without a win, got his head in front at Windsor with a gutsy effort. Jimi Hendrix grounded it out at Haydock having looked like he was struggling at the top of the straight in a competitive handicap, and State Occasion managed to pick up a race in the Stewards Room at Chelmsford. Kinross ran well in the Group 3 John of Gaunt Stakes finishing third, beaten by a neck, which should set him up well for the year.

Looking forward to Royal Ascot next week – Angel Bleu returns in the St James’s Palace, Prosperous Voyage runs in the Coronation Stakes, and Scope goes for the Gold Cup. In the handicaps we will have Rock Eagle for the Ascot Stakes, Star of Orion for the Royal Hunt Cup, Deodar for the Buckingham Palace and State Occasion in the Kensington Palace. New Mandate goes for the Wolferton Stakes and we will finish the week with Kinross in the Golden Jubilee.